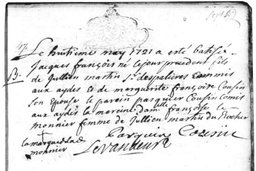 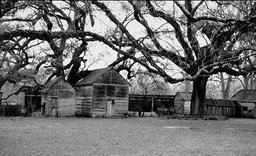 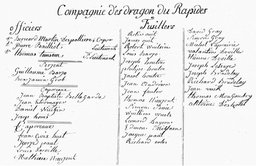 Included in this book: the story of

Chief Registrar of the Supreme Council

and many other namesakes during

This edition is illustrated with 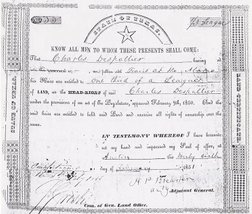 FROM MARTIN TO DESPALLIER

colonization of the western part of the world. Spain, Portugal, France, and England were involved in exploring and colonizing the Americas from north to south. The colonies were at the mercy of the European powers, which didn't hesitate to attack each other's overseas territories. The country ruling over the Caribbean islands, in particular, changed frequently. This chapter also sketches the location and short history of Normandy, the cradle of the Martin family.

• The next chapter goes into detail. It describes the first members of the Martin family, who were traced as far back as 1610. All relevant descendants are mentioned and well-documented by means of church, civil, and other records found in the archives. It also explains why the Martins added "des Pallières" to their surname. The next chapters describe the life of those who went overseas.

• First, the story of Georges is told. He served the French King in Fort de Chartres (IL) as an infantry officer. After the French and Indian War, he left for New Orleans and later moved to the French colony of Saint Domingue (now Haiti). His brother Charles-Bon was appointed as chief registrar on that island.

• Logically, the next chapter describes the fortunes and misfortunes of Charles-Bon. He made a swift career in the French administration and jurisdiction, becoming chief registrar to the Superior Council of Saint Domingue. But Charles-Bon became very ill. An extensive medical file was found in the archives describing his tropical disease and voyages back and forth to France, trying to cure himself by drinking special sulphurous spring water. His wife looked after their small coffee plantation and slaves.

• We then look at the strange case of Georges and Charles-Bon's youngest brother Claude. He seems to have been quite a rascal, making his own way to Saint Domingue as a boy. Chief registrar Charles-Bon forced him to return to France, where he was detained in the strict boarding school of Saint Yon. After a few years, he left France again… for Saint Domingue.

• Another brother was Léonard, who joined the marines, serving as a naval officer in the East India Company. He married a girl from a well-known family of apothecaries and medical doctors. Léonard could have used their influence to boost his career, but things didn't turn out well because the marriage ended. The right to divorce was just voted by the new French government (the famous French Revolution turned the old world order upside down), and Léonor was one of the first who made use of this new law.

• We then turn to events taking place in America: to French Louisiana and its relationship with the Spanish colonial possessions. We specifically look into the history of the small fortification of the Poste des Rapides along Red River. Georges' son Bernard was stationed here, serving as captain of the dragoons and as an Indian scout. The archives reveal a moving letter, where Bernard expresses his gratitude to have found a new life at Rapides and in which he tells the reason why he had to leave his home in Saint Domingue. That reason will become clear after reading the next chapters.

• Chief Registrar Charles-Bon died in France after leaving his wife in Saint Domingue, tending their plantation. But he brought his young son Bernard-Charles with him. The boy studied and followed in the footsteps of his father. At the age of eighteen, he was even appointed as the new chief registrar. After a declaration of majority was passed to the civil authorities, he returned to Saint Domingue to be introduced to the Superior Council. But after the French Revolution, the ideas of freedom spread to the colonies. The white population was divided into two sides: the monarchists and those who wanted independence from the European motherland. The countless black slaves working at plantations, leading appalling lives, also heard of the Declaration of Human Rights. Those rights, however, only seemed to effect white people. Therefore, the so-called Black Revolution of Saint Domingue started. Bernard-Charles had to leave the island and return to France.

• Now we know the reason why his nephew Bernard fled to Rapides. Bernard, now known as "Bernardo" Despallier, acquired or tried to acquire tracts of land in Louisiana. International politics, however, crossed his plans. French Louisiana became Spanish, but soon after that, it was again turned over to the French. Eventually, French Emperor Napoléon sold the entire territory to the United States. Bernard now became loyal to the Spanish King. He turned his eye south, where the vast colony of New Spain, especially Mexico, looked promising. He moved to Nacogdoches and Trinidad de Salcedo and became friends with the local Spanish authorities. Bernard even joined their army as a scout. He married and had several sons. Then he had big plans: he wrote a very extensive proposal to the King, requesting the right to establish a new settlement in the northern provinces. This colony would be populated with a thousand malcontent families from Louisiana. The King agreed, but more international events would force Bernard to abandon his plan. He was even expelled and had to return to Louisiana.

• The next chapter describes the events in Europe, where the War of Spanish Independence would have its effect on the overseas colonies like Mexico, which took advantage of the weakness of the Spanish motherland. The colonies, one-by-one, declared their independence during the years to come. It then tells of the Gutiérrez-Magee expedition. Bernardo Despallier did join forces with Gutiérrez and the invading Republican Army of the North in 1812. He also wrote revolutionary pamphlets. As the filibustering campaign ended, Bernard was forced to return to Louisiana for good.

• A separate chapter explores the Land Grants and Head Right granted to those who fought in Béxar or died at the Alamo. Their heirs are known, and the tracts of land are traced.

• Another chapter deals with a strange coincidence: there was a Charles Despallier and a Carlos Espalier at the Alamo. Were they one and the same person? Land Grants and Head Right were given to their respective heirs, so the authorities did decide they were two different men. But their heirs do have the same family ties. Despallier and Espalier must have been at least second cousins. Or was it a fraud?

• In the end, young Blaz Philipe II Despallier inherited everything. We follow his life through civil and land records. He lived not so far away from the old Poste des Rapides in the town of Alexandria. During the Civil War, Blaz Philipe served the Confederate Amy as a soldier. He was captured and paroled at Vicksburg in 1863. He was later accused of killing a black man. His trace leads north: he moved his family to California, Nevada, Oregon, and Washington.

• Then, it’s time to see what happened with the second Chief Registrar Bernard-Charles, who returned to France in 1795 after the Haitian revolution. He made a career in politics, justice, and diplomacy. He also became acquainted with Napoléon's wife and was knighted by the Emperor. The family again employed their older surname of Martin des Pallières. Those who stayed in the United States kept their surname as Despallier. Bernard-Charles was able to recover some of the wealth he had lost in Saint Domingue. He was elected as a member of the local parliament of the French Vendée and later became consul of France in Belgium.

• In the last chapter, we meet Bernard-Charles' children and grandchildren, who all made careers in the French Navy and Army. Many of them had a significant military career, serving in Africa, Cochin-China, Guadeloupe, the Middle East, and China. One of them, Charles-Gabriel, had the rank of division general, and barracks were named after him. We end the story with those who gave their life during the First World War.

From Martin to Despallier

The Story of a French Colonial Family 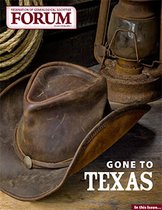 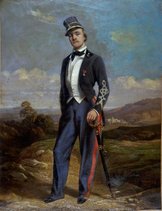 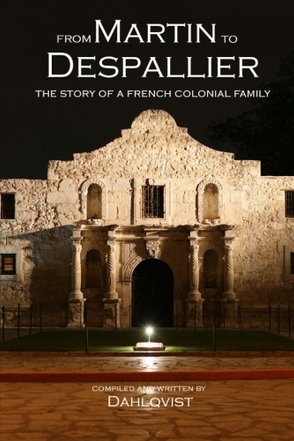 Title: From Martin to Despallier

Subtitle: The Story of a French Colonial Family

Libraries, historical associations, genealogical associations, heritage museums, resellers: this book is available via CreateSpace or Ingram with discounts: contact the author to obtain a discount code. Academic institutions may purchase this book through Baker & Taylor; bookstores can buy at Barnes & Noble, Ingram and NACSCORP.